Sapere Books are kind enough to send me free copies once in a while. This is one of those books and the review is from my Goodreads profile.

Albanian Assignment: The Memoir of an SOE Agent in World War Two by David Smiley
My rating: 4 of 5 stars

This was given freely for review by Sapere Books.

It's hard to imagine that lives like this are real. David Smiley was a young man who was an army regular at the outbreak of war. After service in East Africa he used his family influences (he was of noted stock) to join a commando corps and started his most extraordinary adventures. After missions in Abyssinia, Syria and Palestine he joined the Special Operations Executive and was parachuted into Albania to work with the locals against Italian and then German occupation.
What is most fascinating about these times is the underlying politics. Albania wasn't (isn't) a country of similar people. There are different ethnicities, tribes and religions with some being Muslim and some orthodox. Sadly, these differences in that region never seem to have settled and in my lifetime there have been tragic events in Kosovo against ethnic Albanians.
At this time communist forces are also trying to establish power in the region. The British government plays games behind the scenes trying to not only win the war but also influence the outcomes. Will we ever learn that arming groups with British weapons so often works against us? As we now know Albania entered Soviet influence and King Zog was exiled - it could so easily have been a similar story in Greece where civil war was also unfolding at the same time.
Back to Smiley - he is at the forefront of these events. He discusses with all parties in the field in an attempt to drive out the Italian and German forces. He moves around using false identities or disguises and at one point even has a lift in a car with a German soldier. All this despite speaking little Albanian and conducting many conversations in French. The sheer front of the man (and others alongside him) is phenomenal.
A strange and disconcerting aspect of the book, to me at least, is the cold bloodedness of war. While Smiley clearly describes with fondness certain dishes he ate, houses he stayed in and girls that served him the truly exciting events are tossed aside in the manner of "we laid a mine to disable a troop lorry and killed about 20 men as they jumped off". Simple as that, and yet the affection he had for a horse was enough that he showed real emotion at parting. I guess that's how soldiers are trained.
I really enjoyed these memoirs - the politics really drew me in, especially being of an age that remembers the Cold War of the 80s, the fall of the Iron Curtain and the Balkan wars of the 90s. This is where it all started and it's not pretty reading for fans of British influence. Our soldiers are as incredible as ever, our politicians as inept. Greece avoided communism despite British aid, not because of it according to this book.
A great read for fans of politics and war history as well as those who want a true story of incredible heroism, this is a recommended read.

The librarian of Auschwitz by Antonio Iturbe

This book was a freebie from O2 rewards. You can win the copy I read at the end of the post.

The review is taken from my Goodreads profile.

The Librarian of Auschwitz: Based on the True Story of Dita Kraus by Antonio Iturbe
My rating: 3 of 5 stars

It never decreases, the horror that a massacre of this scale by a civilised nation could have happened. That being born of a particular race can lead to systematic murder on a factory scale, using state of the art technology. That a nation so similar to our own could find enough willing participants to carry out the evil will of a nazi government.
Amidst the horror the camp inhabitants continued everyday life. Brave, intelligent souls worked hard to bring a routine to each day to keep up hope and spirits, especially amongst the younger children.
At Auschwitz the nazis set up a 'family camp' and the inhabitants of this camp worked. The intention was that this was the camp that the nazis would show the Red Cross if they visited in the hope of persuading them that they were behaving in accordance with international law. How they would explain the smoke and the chimneys is anyone's guess but the Red Cross didn't visit, nobody came until the end of the war.
14 year old Dita comes to the camp with her mother and father. Like many of the camp's inhabitants she is Czech. In the 'school' that is set up in the family camp she is the librarian, charged with looking after the 8 books that have been smuggled into the camp. She checks them out to the teachers, she repairs them and she hides them every night. The nazis know nothing of this as teaching is forbidden, books are forbidden and pencils are forbidden. But for all the evil in humanity there is a greater amount of ingenuity, of spirit, of determination and of love.
This is a novel based on the story of Dita. Many of the characters are real and the events are as described but worked in a storyline format. It is heartbreaking and sickening but also uplifting.

Life cycles of British and Irish butterflies by Peter Eeles 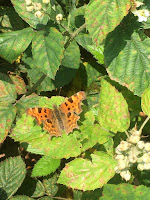 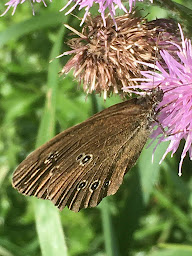 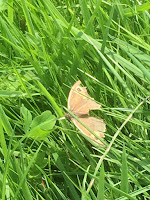 When your usual life of rock gigs, sport and nights out is taken away how does one stay sane and interested during a hot spell when driving out is a no-no? What new interests can a man find to take the place of NWOCR, football or trips to the pub, gallery or theatre?


Butterflies, that's what. This review is taken from my Goodreads page and shows how it captured my interest and gave me something to focus on each evening on my rambles out. I took some great photos too. Butterflies are the new rock n roll.