Silently in the Night by Clayton Graham (book review)

This review is taken from my Goodreads page.

Silently in the Night by Clayton Graham
My rating: 2 of 5 stars

This collection of short stories feels like something of a 'jam session' from the author. Most of the stories are ideas put down on paper rather than carefully structured short stories in the traditional sense. Graham is a fan of traditional science fiction and there are plenty of representatives of the genre here, quick snapshots of a longer story. Indeed, there are chapters of two of Graham's published novels ('Milijun' and 'Saving Paludis') which hint at a better buy for your money. I'm afraid the others just didn't grab me. A decent short story still needs a beginning, middle and end for me to engage with it and most weren't that detailed and needed more. There are some good stories in there - the title story which opens the collection is a decent tale with a twist and and the closing story - 'Trapped' - a sweet story of love that finished thne book nicely. Of the sci-fi tales my favourite was 'Vanguard', a story that hints at something that could be explored further - like the dark side of the Moon where it is set. I'd have preferred to see those tales fleshed out bit and fewer stories.

This review is taken from my Goodreads page.

The Suicide Battalion: 46th Canadian Infantry on the Western Front, World War One by James McWilliams
My rating: 3 of 5 stars

This was a free review copy from Sapere Books.

Like many battalions from across the Empire, the 46th was formed from volunteers willing to leave their civilian lives and go half way across the world to fight for King and country. It is still amazing to think that people would be willing to risk their lives to fight for the protection of a country so far away. In fact, given that Great Britain only entered the war due to Germany's invasion of Belgium to get to France then these brave Canadians gave their lives to protect countries beyond Empire. When one looks back to the times though it has to be remembered that North American countries were younger, their generations of immigrants fewer and the ties to the 'old country' would be stronger. Canadians marched through French towns on the way to war wearing kilts and whisky was the drink of choice for officers.

First published in 1978 this book is meticulously researched and is able to include first hand accounts from men who were still alive at the time of publication. It is a harrowing read. Immensely so. The descriptions of the injuries, the manner of death of so many young men, the conditions under which they lived, slept, ate, fought and died are harsher than more recent accounts. There is no gloss her, fear and horror sit alongside bravery.

And what bravery. There are tales that spring from the pages of comic books, of dashing sergeants running and shooting from the hip; of men taking out a dozen Germans and capturing scores more. To me, though, the real bravery is just climbing up that ladder and walking towards the enemy and the 46th did it time after time after time. The Somme, Passchendaele, Vimy, Valenciennes, the list of battles at which they fought is incredible and yet those same boys from South Saskatchewan kept going back to the line and going again. This isn't crazed bloodlust, this isn't hardened soldiering, this is a group of farmhands and clerks following orders, overcoming fear and honestly talking of the confusion of battle.

The start of the book will be a joy for military history fans but the numbers of battalions and the administration of armies didn't do much for me but once they arrive in England and then on to France it picks up and is as honest an account of how horrific war is as I have ever read. Rum was a welcome relief on the frontline and I raised a glass to them several times during reading this book. 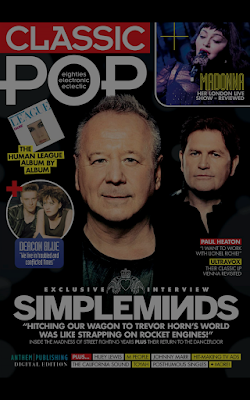 What you need in a lockdown is plenty of escapism and entertainment. For me, music and books rank equally at the top of my wellbeing needs. Telly, Netflix, YouTube and DVDs have played their part but pictures haven't featured as much as sounds and words. I'm surprised at myself that I haven't embraced my teenage self and fixated on video games, now's the perfect time.

Embracing music and nostalgia is the name of the game for Classic Pop magazine. With shops closed and people focussing on essential items they've done a decent thing and made a digital version available for free.

I love a music magazine. They bring songs and albums back into your head that you hadn't heard for ages or give you a new angle on songs you've known for years. For example - we all know Prince was a prolific writer and was always messing about with his songs but have you ever noticed that the verse structure to Manic Monday by the Bangles (wot he wrote) and 1999 is the same? I've owned both songs since the eighties and until it was pointed out I'd missed that too.

When you've got Simple Minds on the cover you're off to a good start. They were the first band I saw live on their Street Fighting Years tour (I'm not counting Tiffany at the Birmingham Bullring on her free 'mall tour') and the focus of this lead article is around that album, which I loved then and still do. Deacon Blue are on there too - another band I loved and saw and the soundtrack to my first proper relationship. I'm over it now, honest.

The articles are glossy and in depth, this is a quality magazine. The Ultravox article, for example, isn't just a trot through Ultravox's whole career but anchors on the Vienna album with song by song analysis.

Madonna, Huey Lewis, The Human League - are you spotting a connection? Whilst this is called 'Classic Pop' you have to look a bit closer for a tag line - eighties, electronic, eclectic. You won't get much from before or after the eighties unless it's part of a feature with an eighties focus such as the development of the LA scene or the great article on how the late eighties were dominated by commercials reissuing old classics - remember those jeans commercials?

It's a great read and the Pocket Mags app works well, apart from articles which flip round to go across 2 pages. When I turn my tablet round to read them the picture flips so you have to turn off auto-rotate just to read one page.

As I said at the start, I love a music magazine and this is a great read. Problem is, I stopped buying the magazines a few years ago as I couldn't keep up with the price. £5 - £6 is too much for me, although Classic Pop comes down to just over £4 if you subscribe. I get the reason, the amount of journalism and the production values probably mean that this isn't a high mark-up but  I think I'd rather the cheaper paper and fewer glossy pics of the golden days of Sounds, NME and Smash Hits. It's the words that are the strength, not the pics.

Murder on the SS Rosa by Lee Strauss (book review)

This is a copy of my review published on Goodreads

Murder on the SS Rosa by Lee Strauss
My rating: 3 of 5 stars

This was a free download from the author in return for an honest review.

If I had to pick characteristics of a cosy mystery that make it my ideal I'd probably choose things like a 'golden age of mystery' era, eccentric middle and upper class characters and a 'closed cast'. It's the ultimate escape for someone who lives in a modern day, reasonably safe (certainly murder free) environment where (in normal times) I meet with a wide variety of people who are mostly working or lower middle class but usually in humdrum settings like offices.

This story has those elements - a 1920s cruise liner is the setting. You've got the closed cast, you've got the era, you've got the types of people in your officers and passengers who can afford the better class of cabin. The cast size is increased by those auxiliary roles that come from outside the middle classes at the fore of the plot but add extra levels of texture - the companions, servants, cooks waiters and the ever dependable brave young urchins from third class. If only threre were a body in the cold store.....

Take the above ingredients, shake thoroughly and pour over an ice cold murder. Garnish with a beautiful, intelligent, witty young widow called Ginger Gold, her sidekick companion and a handsome police officer and serve. Drink slowly and enjoy.

Like all cocktails, this is delicious but never seems quite enough and leaves you wanting more - my main gripe, I'm afraid. I'm greedy - I want cocktails in a pint glass. This is more of a long short story rather than a novel. The good news is that there are other Ginger Gold mysteries to binge on. I haven't read them but I've a feeling several characters from this will appear again. Those urchins are worth their weight in gold.