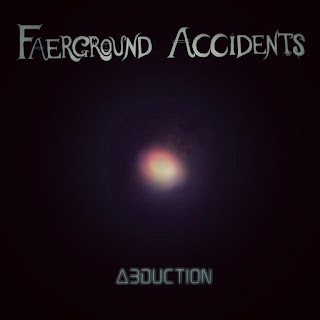 Back in 2018, at the Outlaw Rock n Roll Weekend, I had my first experience of Faerground Accidents. I hadn’t even heard of them before then, I’m ashamed to say. As John Robb (who signed them) said sometime ago - “If this band isn’t massive by this time next year then you’re all deaf”. I was deaf then but now I hear. If I’ve interpreted the band’s Facebook pages right then I’m sad to say that I think I was there at their last performance. Please goodness that I’ll be there at their next.

This blog is about things that are free. This album is free to download on a ‘pay whatyou want’ basis. It’s described as unfinished. Imagine what it could have been – read on.

In the interests of honesty, I’ll confess that I chose to pay for this. It’s offered as a free download and you get the choice. I chose to pay £3 and that was a steal. I’ve since paid for a physical copy of the first album and when times are easier I’ll go back in for merch. Think about who you are, what you get from the music, what the artists put in and what you can do to keep that are flowing.

Driving bass opens the album on Animals, a post-punk pop tune that introduces Bomar Faery’s wonderful voice. It’s one of those voices that is slightly flat (and this isn’t a bad thing), hanging onto notes with passion like Bowie or, it’s closest semblant, the voice of Marc Almond. This is a magnificent, dirty opener - “thrust and lust and then we’re dust” - we are animals. Or wish we were in some of our cases

Riffing through Oblivion we come to one of my most favourite songs of the last 2 years and a GAME CHANGER.

Perfect Stranger is one of those songs that come along every few weeks when you’re a teenager, every months when you’re in your twenties, every few years in your thirties and are absolute gold dust when you get to your late forties. A song that on first listen made me slow down on a drive up the A1, replay several times and hang on every word. A neck-tingler, a song that belongs to you and you alone, and a song that is ONLY done credit by a voice like Faery’s. Three tracks in and it’s now the keyboard and synth support really takes a grip: unnoticed before, it’s the keyboards that lift this album to another level. Guitars are secondary on this. There is complete longing in Bomar’s voice when he asserts “I’ve got to believe” and I do so hope he is drawing hope from this. The song is a plea for help for a planet in peril, a message out there for some sort of help. The lyrics move from I to we and back, and I want to be on Bomar’s side. Here’s the game changer – this album has been my soundtrack to isolation due to Coronavirus. It’s the one I’ve properly discovered, listened to time after time and the one I know will remind me of this period. The planes that used to go over my apartment stopped long ago. Nobody is commuting, wars are slowing and economies are brought to their knees. And yet, the birds sing and the daffs grow, the world is loving this. Covid-19 isn’t bringing the world to its knees, just humanity. Those of us that can cope with our own company, that don’t need stuff, that appreciate the creativity of others for what it is and not because we read it’s what we should like – we’ll be fine. I thank Bomar for his plea and wonder whether he realised his alien would be a virus.

It seems weird to move on to another song after that emotional outburst, and after the talk of aliens we’re onto title track Abduction. This is the time I started to picture this as a ‘concept’ album. Maybe not with a linear storyline but certainly with a common theme. This Bowie-esque drama talks of ‘hidden forces’ and we’re still on aliens, rejecting older explanations of how the world works. This voice that has hooked me draws the song to an avalanche of guitars before a mournful end.

You’re getting the concept now, right? The next track is Come On Back To Earth, an offbeat and dancier song. My handwritten notes from first listen say ‘a wonderful, wonderful pop song’ and maybe I’m not sticking wholly by that but it is a traditionally crafted song that you’d be so happy to hear on an old nostalgia show. Maybe the perfect pop song for a 48 year old of certain tastes.

Rebirth is the hopeful song (I hope). I said earlier that I’m not a long-time follower of FA. I can’t claim to understand their story or their ‘journey’ but I have read around them a bit as I wanted to put more into this review than most others (yes, the album is that bloody good). Bomar has mental health issues. This speaks to 70% of the listeners, 20% of the listeners will be in denial or ignorance of their own health and to the other 10%, we all salute your luck. Bomar has had it bad, proper bad. Not tablet bad; hospitalised bad. From what I read he came back from a stint in hospital to perform in the era I saw them and to work on this album. No idea on where his health is now but the reason I’m saying all this is twofold: “From chaos comes rebirth, out of rebirth comes sadness and madness and chaos, out of chaos comes everything” - if this is mental health then in my own life I’d rather go back to rebirth than find a sudden end. If it’s about the world then again, we may be in the chaos period at the moment but we will end up with everything.

At this point I should point out that Bomar works his way through a bottle of wine during his live set. I’ve now achieved that during this review, if you were here you’d see how full of love I am. I’m going to post this before I review in a less hippy mood.

We never died actually sounds rather joyous but I wonder if that’s the case? In my Corona time of writing it’s weird to listen to lyrics that say “we never died” [hurray] and then “the funny thing is we don’t get out alive” [oh bugger] and I suspect this cheerful tune hides a more sarcastic or ironic message. If we’re referring to the earlier tracks then I guess we make it through our issues but we’re never the same people we were before.

Eight songs. One side of a C-90. Not many albums do that nowadays and who knows whether this would if it were finished? The eighth song, Disappearer, is the one that speaks most to my own understanding of mental health. I’ve a mild form, I can control it, I’m lucky. This song feels personal, listen and write your own interpretation. This song plays out with a long instrumental before the word disappearer closes – I really hope it’s not a portent. I want to see Faerground Accidents as a fan.

A CD of FA’s first album Co-Morbid arrived in the post yesterday. I haven’t even opened it. I’m scared in case it isn’t as good as this.
at April 10, 2020