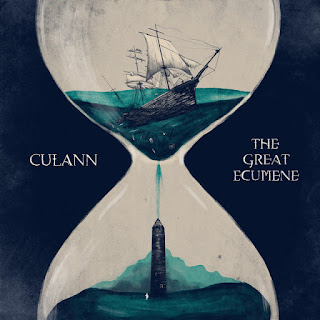 An large inhabited land related to us by a legendary Irish smith. That's a very uneducated translation of both 'great Ecumene' and 'Culann'. Every day is a school day.


I wouldn't have known that if it wasn't for a message out of the blue from PJ Kelly, lead singer and guitarist of Culann, offering me a copy of their latest album 'The Great Ecumene'. I'm so glad he did as it's a sweeping, proggy, guitar laden hour of joy. I wouldn't say there are a variety of styles but the band really stretch the genres of rock and try all sorts of beat patterns that generally work out just fine.

Irvine, the band's home, is said to be the site of the lost Scottish city of Evonium (makes sense if you look at the words) and this band obviously have a deep love for their region. Evonium is the opening track and a superb start. Syncopated rhythms, forceful guitars and a lovely solo, this song has a bit of everything. There are banging guitars, proggy moves, anthemic vocals and a slow, lingering fadeout - this sets a good tone for what is to come.

Event without expectation launches with a full on rock opening and continues with your chords, tight drums and a singable chorus. This is the first time you notice the accent - "I feel it every dee". I'd love to see this performed live.

Prog really comes to the fore on Brewing of ale, an offbeat track reminiscent of Jethro Tull. Charge your tankards for a rousing swing until the ale sloshes out the top.

It took me a few listens to really get title track The Great Ecumene. On first listen it didn't seem to get going but it was worth perservering with and listening to a couple of times. As you'd expect from a proud band, this is a proudly sung song.

The band settles into a groove for a few songs - All reverie, Sunken ships and Aegis all fine singalong, well drummed tracks full of energy.

And then we end with Queen Street, the gentlest track on the album and a song for our times. This beautiful song is s cry out against homelessness with one of my favourite lyrics of the year - "I would beg of you one thing, don't make me beg for it".

Culann have been writing for a while and this album has taken time to put together but shows they know their craft and have a lot to say. I wouldn't say it was all killer, no filler, but there are certainly no weak spots. Every listen pushes something else to the fore and one can imagine that their gigs would be amazing - an album with so many punch-the-air moments demands it. So glad I got to hear this, and when this crazy world settles down then maybe they'll wander south. Mind you, it wouldn't be much hardship to make a trip up to Ecumene for a few days if I get the dates right.