Blind Haze & Daxx and Roxanne at The Globe, Glossop - boogieing in my own backyard.

Back to The Globe, Glossop for yet another incredible gig with no entry fee. I've happily parted with money to see both these bands before and would have done so again. Rule number 1 - buy some merch. You've got a few hours of top music for nowt so buy a t-shirt or a CD, give something to the band. The venue will get your support from the bar (£2 for a pint of cider in the Globe -  I KNOW, RIGHT!) so the best way you can say thanks to a hard working band is to spread the word by playing a gig-purchased CD at full volume or sporting your new t-shirt to the boozer.

Blind Haze are my favourite new find of the past few years. It's all I love about live music - a three piece wall of sound. Conan towers over you when he's not on stage so once that bass gets going and he launches into Mine All Mine you better listen. What follows is a relentless set of kicking dirty rock n roll, Ben's drumming driving the pace and Nicky's guitar working it's way through endless riffs and solos in trademark vertical style. My mate thinks he needs to ditch the hat but I think he looks reet cool. The mid-section rolls into Backstreet Boogie and Burnin' Up off the latest Red Light Fever EP. A new song almost catches them out a bit but I don't mind this and the band laughed it off too - that's what gigs like this are for, trying out summat new.

My own favourite Snow Queen starts the last section with an unexpected couple of covers at the end. Give the punters a bit of Motorhead, they'll be happy.

Bloody love this band, proper down to earth honest rockers.

What made tonight even better was that a decent crown turned out to ramp up the atmosphere. Daxx and Roxanne brought a few fans with them and already have a few in the area from previous appearances at the Globe. This was their warm-up act before hitting the bigger stage of HRH Sleaze the following night in Sheffield and maybe a few Swiss friends had joined others to venture Up North for the weekend. 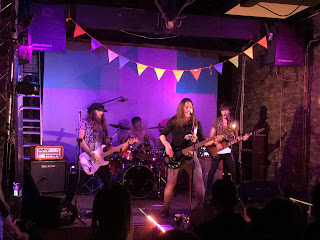 D&R are such a hard working band. From Switzerland but based in London I've seen them 3 times this year already in Glossop and Manchester. They must do hundreds of shows every year and I would suggest they never give anything less than 11. Ticket to Rock is the sleazy tacky belter you'd expect and the song that sums them up for me. Good time boys enjoying their time on the road, playing their stuff and giving it their all. More commercial than Blind Haze they probably appeal to a wider rock audience with their more radio friendly blend but they aren't afraid to throw a bit of blues in when they want. Singer/bassist Cedric wails when he needs to wail and gets husky when needed but it's Cal on lead that catches my eye, throwing his shapes and clambering wherever he can in the name of rock. Simon and Luca let nobody down on rhythm/harmonica and drums. Catch this band whenever you get chance, they're a whirlwind of energy. Don Airey of Deep Purple knows talent when he hears it - he's guesting on new single 'Interstellar' out later this month.

If you want to hear more about Daxx and Roxanne I recommend going to their YouTube page rather than Spotify. The live videos show you much more about what these boys are about than the singles on Spotify. The debut album is a bit hit and miss, the next one will have a few more years experience and promises to be a stormer.