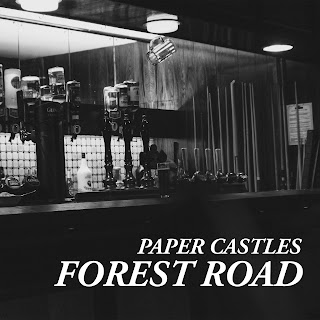 There's loads more to being a student than cheap beer, free love and the occasional hour in the library. Moving away from home is exciting and daunting in equal measures and the real learning experience is life in a different city, not the degree you've chosen.

Ellis Adderley, lead singer of Paper Castles and the chap whose experiences lead to the single, is from the same neck of the woods as me and reminding me of the experiences I had a long time ago. Sometimes it's not the drinks promos, parties or middle class girl from London that catches your eye, it's the new surroundings. Forest Road faces a cemetery, working girls ply their trade nearby and souls adrift from normal life seek company and confession in the park.


These scenes are revealed in a spoken style quite different from that on first single 'Cold Hard Floor' and it's stronger for it.  There's some fine guitar work throughout too, from the jangly opening to a blunter middle section as Adderley's vocals get angrier before descending through a faintly psychedelic repetitive section into a driven finale. Something for everyone and a great story being told. Yes, we all drank too much and ran out of money quickly but let's be honest, if you don't do that you've wasted your student years.

Grateful to Ellis for getting in touch and giving me an advance listen of this great track. The self-styled 'Worst band in the Midlands' moniker clearly isn't true, however hard they try.

Forest Road is released on 31st August and I'm guessing available on Spotify like the last one. Or you could get it from the band themselves by following them on Facebook Instagram and Twitter
at August 29, 2019 No comments: