Why the gap in posts?

Marriage broke up, moved into my own place. Heartbroken. Worked hard at keeping things moving and making it easy for our children. Made it through Christmas. Let's move on. 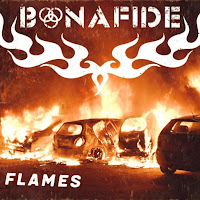 That's how the dictionary defines 'bonafide' - genuine or real. It's right you know. This is good old blues rock by a master, nothing new but nothing artificial either. I went to three music festivals from HRH last year, the last of which was 'Doom vs Stoner'. There were several free CDs given away including this one - I think they were remainder promo copies from editions of HRH Mag.
Not very doom or stoner I hear you say. You're right. Luckily, I'm a lover of rock in all it's forms (apart from the odd glitch in my head which refuses to tolerate Def Leppard or The Eagles) and earlier last year I was at HRH Blues. One of the highlights of that weekend was seeing the marvellous Pontus Snibb's Wreck of Blues, which gave Pontus the chance to unleash loads of long blues solos and play some purer blues stuff.

Bonafide is Pontus' day job - his original band formed in Sweden over 10 years ago. Bonafide's sound is harder, faster more riffs than solos but still classic blues based rock.

Opener 'Back in Flames' bursts out the trap with AC/DC screech vocals and would be a welcome opener to any gig. It's an introduction to the mood of most of the album, with 'Gotta Go' and 'Keep a Safe Distance' other personal favourites that had me playing drum patterns on the steering wheel through the three plays of the album I managed on the road today.  'Bottle of Jack' (the only cover on the album) reminds me I've a bottle on the shelf so if you're the subject of the song DM me - I can do things like that now. Only 'Flipside Groovin'' disappointed - lyrics a bit too tacky for my liking, which I suppose is testament to forgetting that these guys are working in a second language, although if you've seen and heard Pontus Snibb you'll know he speaks Blues like a native (mind you, I've never met a Swede yet who doesn't speak English better than most Brits).

What makes this a CD to keep on my shelf is the closing track - 'Under Your Spell', an epic seven minute slowed down mutha of a song with a finale that builds and ends abruptly showing class as producers and not just musicians (Snibb and bassist Martin Ekelund getting the credit).
Final word goes to Snibb's voice. Gruff, powerful, screeching at times - always mesmerising. I really can't wait to see Wreck of Blues again at HRH Blues V in April and having missed the 2018 tour I'm waiting for the next Bonafide visit to these shores.
Cheers HRH for the tickets to Doom vs Stoner, a copy of HRH Mag and this album.