A fortnight of quality, not quantity. Another fine walk, a delicious treat from a British institution and my book of the year so far this year. Plus a bit of stinky tat (literally) that you should skim over. Enjoy. 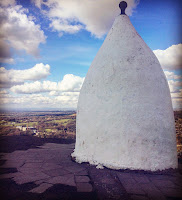 An afternoon up White Nancy. Nancy doesn't mind. Many have been there before me, she is a most sluttish hill. 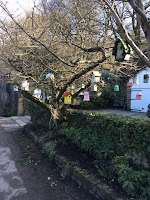 Saunter, as I did, along the ridge away from Nancy to the trig point and admire the views across the Cheshire Plain and towards Wales. Come back a bit and gambol gaily down the hill and into woodland enlivened with birdsong.

Gaze somberly at the ruins of Cow Lane Mill, imagining the blood and tears shed to keep a roof above children's heads before heading up to the road at picturesque Rainow and it's odd little folly.

Over meadows, past more ruined mills - countryside and industry side by side, a match made in The Pennines, my Heaven. Eventually we reach Bollington again, the start of the walk and the site of a free car park. All that above for number. My only outlay being a pint of Bass in The Spinners Arms. A fine afternoon, but by golly that Nancy makes you sweat as you hump your way up to see her from Bollington. 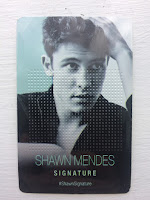 A wee sample that came in the form of a tattoo. A smudge on my arm that resembles a guitar with a name under, a sweet scent that isn't unpleasant and suitable for either sex. Sweet, and not really suitable for a middle-aged man and why should it be? I don't want to smell like Shawn Mendes and Shawn Mendes doesn't want me to smell like him. This wasn't meant for me, Ihave no right to be reviewing it. I've wasted all of our time, sorry.


So many positives to the Co-op - ethical supply chains and sharing benefits to members being the most well known. Being about a minute from my house is another, as is selling stuff off cheap atthe end of the day. Negatives? It's not cheap and my local stores selection policy is diabolical - they sell a lot off cheap and must throw even more away. I saw hot cross buns being sold off cheap on their sell by date - on Christmas Eve. The staff are either end of the helpful scale - incredibly happy and friendly, a proper northern welcome and chat at the till; or surly and resentful of you're bothering them (happily, there are more of the former than the latter).

And why, when they refurbished several years ago, they decided they needed 6 tills is beyond me when they never have more than 3 on the go. The commuter trains that empty every 20 minutes right next door (it's literally the same building) seem to catch them out every 20 minutes too. 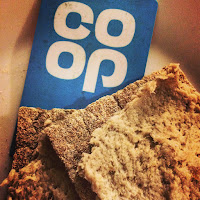 But hey, let's not whinge more and let's do a history of the Co-operative movement another day. The final benefit of the Co-op is that you - YOU - can be a member. This used to entitle you to a dividend of the profits at the end of the year but now mostly revolves around gaining rewards (5% of any Co-op branded product) and getting vouchers. Spend £1 and 5p goes on your card to use whenever you like. Handy when your short and need milk or bread. The vouchers are money off specific types of food (e.g. chocolate, crisps, bread) or money off if you spend a certain amount (usually 10%) - and that's how I got this mackerel pate.

It didn't last long. Smoked fish is a delight in any guise, but when you can spread it over a cracker late at night it's sublime. Absolutely delightful - a smoked, oily fish taste that you don't need to chew. When I'm old and gummy I'll live on this.

Hope and Glory by Stuart Maconie.


Another cheeky freebie. This was found during a clear up operation at work so qualifies as a freebie but I'm not going to profit from it. It'll go to a charity shop and not be up as a competition prize, so no giveaways this fortnight [sad face]. It's an absolute belter though. About 15 years ago I decided that if I won the lottery I would embark upon a lifetime of exploration of Britain. The smallest village, the industrial towns, the countryside, every last inch fascinates me. If I didn't have responsibilities I'd work my way though the index of an atlas in order. Sponsors are welcome. My review below is taken from my Goodreads profile.

Hope & Glory: The Days That Made Britain by Stuart Maconie
My rating: 5 of 5 stars

I was never sure about Stuart Maconie before I read this book. On the odd occasion I have caught his radio shows (usually with Mark Radcliffe) I have found them entertaining. On the other hand I always find his talking head appearances on nostalgia shows slightly arrogant and sarcastic. Journalists from the golden age of pop journalism really care about music and I'm with them when they talk about the manipulation of pop by dinosaurs and the how they tried to suppress anything that might have sent the poor youth wayward and disturbed the establishment. On the other hand, those same journalists were giving us their view of alternative music - there aren't many journalists who write a piece from a purely objective viewpoint.

This book is no different and it has put me firmly on Maconie's side. I'm a definite liker of the chap now. Let's get it out of the way - I'm a bit of a leftie and reading a social history of Britain from someone who leans the same way was never going to see me disagree much. One chapter alone made me think "hmmm, not sure about that" but otherwise I was with Stuart all the way.

Maconie looks at the 20th century in Britain by focussing on one event in each decade. Like most of these books it says it's about Britain but it's mostly about England. However, this is about the people - the majority. Many (not all) of the issues discussed will affect people from anywhere geographically as this mostly focuses on social positions and (that awful word) class. When considering the impact of the first large wave of immigration it is obvious that London and other English cities would have a larger focus but there are interesting diversions to Thetford, Kings Lynn and elsewhere. The 1950s focuses on the Coronation and the ascent of Everest that (officially, but not actually) happened on the same day but contains fascinating visits to Snowdon, my neighbourhood of Kinder Scout and the Lake District. The Lake District also features heavily in the early chapter about the first world war where Maconie visits one of the very few (and I do mean very few, we are talking double figures) parishes in the whole of Britain that suffered no casualties in the Great War.

And this is the absolute joy of the book. The historical core is fascinating, as it should be, but Maconie also describes with intimate detail his journeys and stays in many British towns. Small towns, towns that you will have heard of but have never visited - Maconie doesn't just visit them, he lives them. If you went to Holmfirth, you wouldn't learn half as much as Maconie who just notices stuff. Small stuff, menial stuff, but he notices and learns so much about a place.

Of course, throughout the book there are pop culture references. As you would expect from an ex-punk (I wonder if he would dispute the 'ex'?) and music journo there are many musical references and also film and TV. Maconie is a nostalgist as well as a modern thinker - and in a good way. Most people who wallow in nostalgia seem to take the view that everything was better in the olden days, but Maconie is happy to say "remember when....wasn't that good?" as much as he is to say "remember when...better now, isn't it?"

And the chapter that I'm not sure about? It's the focus of Live Aid in 1985 as the day when celebrity was born. Don't get me wrong, I know it was pivotal and a huge moment but I'm not convinced it was the birth of celebrity status. Maybe it hurried things up but I don't think it was as definite as that. But that's the only moment in the book that I'm not sure about - that doesn't happen very often.

The quotes on the back of my copy are quotes I fully agree with. Maconie is an engaging writer, he is as [possibly] as funny as Bryson and [possibly] as wise as Orwell and this book should DEFINITELY be made available in every school. Anyone who says it is dangerously left wing is wrong, it counteracts the version of history you might have read and this book is the truth you probably already knew, whatever position in society you sit. It doesn't just make me want to read it over and over again, it makes me want to get on a train and just live.