Three weeks have passed since my last blog, but what a variety of riches they brought. From some hard hitting drama to a joyous musical via the by-product of brewing, this is quite a positive blog - nothing much disappointed me these past few weeks. You can win several of the things below in this posts hugely glamorous giveaway. Read on, metal guru.

You Were Never Really Here


I was lucky enough to see a preview showing of this film at The Printworks Odeon in Manchester. I didn't do any preparatory research and went into it totally blind. Well, not quite. I met my datemate for a couple of pints beforehand and he told me two  things: 1) It's not a comedy and 2) It's described as Taxi Driver for a new generation.Odd that we should be watching it together then as the only time I have seen Taxi Driver was on VHS 25 years ago when we both went back to some girls' flat with high hopes and spent the night on the lounge floor. It was our early morning viewing while we waited for those same girls to arise.

It is Taxi Driver for a new generation. A troubled individual saving a young girl whilst battling his own inner demons. It differs in that Travis Bickle starting breaking in front of us whereas here Joe is already broken.

Joaquin Phoenix is absolutely mesmerising as Joe. There is no glamour to the character, no heroics or quips or clever fighting techniques. Joe is efficient and terrifying to those on the wrong side of a hitman for hire. Phoenix has a driven weariness in his walk, his eyes and the small amount of dialogue needed. Flashbacks to Joe's childhood and earlier service days explain how he became this pill-popping merchant of death but the scenes that focus on Phoenix's face tell enough. He's always been an oddball and is known to through himself into roles but how much method does it take to get the story in the depths of his eyes? Honestly, the performance is extraordinary.

As a relatively short film the plot is secondary to the character. Joe takes on a job to rescue a politician's daughter from an underage brothel and in the doing so uncovers an even shadier affair. To be honest, you won't get that from the film and it doesn't matter. It's a film that is to be interpreted rather than followed. You can surmise things here and there and who's to say you were wrong? This blog isn't a spoiler fan so I'll leave it there on plot. What you do need to know is it is violent and very unsettling. The violence is mostly off camera and cleverly cut but don't be swayed into thinking it isn't a violent film - it is.

It's early in the year but Lynne Ramsay has produced a masterpiece that deserves to be talked about at Oscar time next year. An incredible piece of work.

Two films on the bounce, unusual for someone who's generally a book reader or episode junkie. This DVD came courtesy of Skystore as a free gift for registering - no subscription, commitment or postage, a proper freebiet. Even thought the film is 6 years old it's still retailing for £7.99 on the Skystore site itself so fair play on a generous offer.

I don't mind the odd superhero film but I can't say I'm a junkie. My wife and son guide me in what's what and I do get confused with the sheer number of films around. There must be a fair market for them though - this 2012 film is a reboot of a franchise trilogy that ended just 5 years earlier according to Wikipedia, the first of which was just 10 years earlier. If it's generally kids of a certain age that watch these then maybe there's mileage in going through the origins of the hero and giving them their own version. Like Roger Moore is 'my' James Bond and Tom Baker is 'my' Doctor Who, maybe one day kids will describe Andrew Garfield as 'their' Spider-Man.

And a fine Spider-Man he is too. It's not so much the times in costume that impress (as most of that is CGI and the talking bits could be anyone) but the bits in between. The awkward teenager that is regularly bullied; the science geek who finds evidence of what may have happened to the father who disappeared when he was young; the boy who makes the most of a piece of fate and gets the girl. I'm not the first to note how much Garfield resembles Anthony Perkins in Psycho - the nervous tics and twitches but the determined sense of being right when challenged. This is an interesting performance and brave to steer away from a wise cracking slick boy.

The plot follows (I believe) a similar origins plot as other films. Young boy lives with his aunt and uncle, sees uncle killed, gets bitten by a spider and gains spidey powers. The love interest changes (well, the name of the character does - played here by Emma Stone) and the villain too. Rhys Ifans plays the shadowy scientist who gives himself superpowers and becomes the Lizard, wreaking havoc on the city until - well, see if you can guess what happens?

The plot doesn't really matter. It's not challenging and there's no depth but that doesn't seem to matter. The action scenes are fine and Spidey's ways of swinging through the city are almost believable (unlike the cartoon series I grew up with, where one was never quite sure where the 'ropes' were attached) and fun. It's the opening half hour that really grabbed me. Garfield and Stone are reaally engaging and Peter Parker interested me more than Spider-Man himself.

I'm giving away my copy of this DVD, along with other stuff I've received this week. Scroll down for the comp.

Murder on the Orient Express by Agatha Christie.

Another Goodreads win and lucky to be from one of my favourite authors. You may well know the plot but there are no spoilers in the review below (taken from my Goodreads profile). Scroll down to win the copy I won, amongst other things.

Murder on the Orient Express by Agatha Christie
My rating: 5 of 5 stars

Cards on the table (to reference another Christie book) - I adore Hercule Poirot. I'm a huge Agatha Christie fan but it's particularly the egg shaped head of the Belgian detective that excites me. I was lucky enough to get a copy of the latest paperback edition from Goodreads.

A train heads back to Western Europe from the Middle East with passengers from a variety of nations on board. Somewhere in the Balkans it hits a snow drift and remains trapped. It could be several days before they are rescued...

... and in one of the sleeping compartments a body is found, stabbed many times. The door is locked from the inside.

Classic mystery set up covering two of the most popular motifs - the locked room and the confined group. Since crime mystery stories first began the locked room has perplexed many of your famous fictional sleuths. How on earth can someone be dead in a room locked from the inside? Poirot will help you out. The carriage is stuck miles from anywhere in the snow with nowhere to escape, so the killer must still be amongst them. Will he or she strike again? Poirot will sort it.

What follows is a methodical survey of the scene, of each character and a listing of the facts as they arise. It's far more linear than most other Christie books and quite claustrophobic - mind you, Poirot gets to sit in the lunch carriage to conduct his interviews. Everyone else is stuck in their compartment, even the innocent must be ready to crack. A whole train full of killers, there's an idea.

The plot doesn't sound exciting but it is so intriguing. Poirot delights as ever and Christie builds the clues up like blocks until the structure is there but you can't quite make it out until Poirot suddenly spins it around and then OF COURSE! How did you not get that?


View all my reviews

Last Monday an email dropped in my inbox offering free tickets to see this musical at Buxton Opera House. Now I adore that place, and I love the music of T-Rex so 24 hours later I'm on my way. 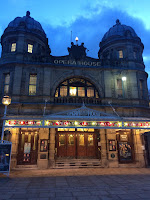 If you haven't been to Buxton Opera House then I hope your wait isn't long until you do, wherever you are. It's divine. A stunning frontage leads to a small lobby (this is a very compact theatre) where the friendly staff all wait to greet. The bars are also small and quaintly set out (several pubs are so close that they also offer interval drinks to be pre-ordered) but I can never wait to get to my seat to take in the decoration of the theatre itself. Imagine this in the early twentieth century when it was built, and what a tragedy it would have been to have lost it in the seventies, as seemed likely. Now it's as busy as ever and a joy to visit. 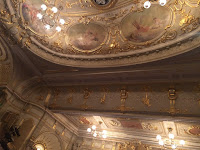 But what of the show? Well the music is the star and George Maguire does a great job emulating Bolan, which can't be easy. To my untrained eye most of it looked live which gives even greater kudos.

The plot follows Bolan from childhood to tragic end, from the Mod model through the psychedelic folkie and into the Electric Warrior - the founding moment of Glam Rock. At his side throughout is his mother and alongside him his wife, June and later Gloria Jones who was driving the car on the final fateful night. The entire cast comprises of just about 10 actors who play multiple roles and the scenes merge in and out in quite a fluid way that reminded me (and this is meant in a good way) of Legz Akimbo - is there a term for that style?  It's not rich in scenery or effects, the music does the work. 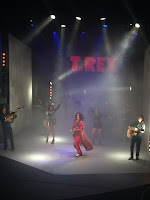 For me, the times when June and Gloria sing slowly about how much they love him were a bit too long and I yearned to get back to the glam and louder music. Luckily, the talking bits were minimal and the best music saved until last with a fine finale. These actors graft hard and have quite a punishing touring schedule, they deserve plenty of praise.

Have a bop to this and then enter that competition.


So here's the competition. I'm giving away the Spider-Man DVD that I received, the copy of Murder on the Orient Express I read for my review and a wee pot of Marmite. All three things can be winging their way to you by entering the easy competition below.
Listed On Loquax 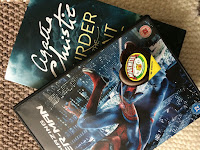