My freebies are usually posted to Instagram first, when I'm in the moment. I then follow up with a full post of observations, reviews or anything else I fancy writing after I have had time to reflect.

During these past 2 weeks I've posted 6 free things but the highlights are around art and performance. Read through and at the end you'll find a chance to win a DVD copy of 'Fences', the Oscar nominated film starring Denzel Washington. In fact, let's start with that film...

Troy Maxson (our Denzel) is a former Negro-league baseball player who know works on the bins (I think it would be called a refuse collector) in 1950s Pittsburgh. His friend Bono (Stephen Henderson) has been alongside him for many years and they work hard to provide for their families. It is this sense of provision that is core to the story.

Troy sees providing for his family as his duty, and the duty of every man. We (or certainly I) see that Troy has other values that he may not even know he has himself. He does want to provide, but he also wants others to provide for themselves. He demands recognition for what he provides (maybe harking back to the adulation of being a revered sportsman) but fails to recognise the journey others wish to take. He loves and respects his wife, Rose Lee, but shows an incredible lack of empathy at a crucial point and his attempts to keep people near gradually seem to drive them away.

The film is adapted from August Wilson's 1985 play and the title reflects these values. Building a new fence is a sideline activity in the film that symbolises the fences Troy (and all of us) build in our lives. Some keep people out, some keep people in. Some come down, some need strengthening. The screenplay (by Wilson, just before his death) is astonishing and skilfully directed by our Denzel himself. With just seven characters and fewer locations it is the conversation that held me spellbound for two hours. A film can be judged on special effects, action, thrills and many other things. This relies on script and performances.

Oh my, what performances. Viola Davis won a 'Best supporting actress' Oscar as Rose Lee Maxson, the wife of Troy Maxson. Jovan Adepo excels as Troy and Rose Lee's son Cory and Mykelti Williamson is convincing as Troy's brother who suffers mental difficulties from a war injury. But for me Denzel Washington gave the best performance I have seen in a film for many years. Absolutely spellbinding in his portrayal of fun and humour, anger, arrogance and fight. Washington so easily shows that there aren't just many types of man, there are many sides to each individual.

One of you lucky readers is going to find this out for yourselves - there's chance to win this copy at the end of this post. I've redeemed the download code so this might not work twice, but you get the DVD so that'll do you.


Looking for freebies isn't difficult really. There are tens of thousands of free games for mobile phones and I'm sure much better bloggers than me dedicate their blog to them. I can no longer call myself a gamer as the two boys in my house have full control over the Xbox and I only snatch the odd game of Fifa or COD. The heavily used iPhone can only really cope with one installed game at a time otherwise the memory and battery disappears too quickly.

This game has stayed as that sole game for well over a year now. Quite why a simple match-3 game has gripped me I'm not sure but I think it's the  progression and development of the garden that is the key other than the usual working your way through the levels that you get with games like Candy Crush. Completing a level wins a star and you swap stars for things for your garden. Austin the Butler is your trusty sidekick who guides you through the main storyline and odd sub-story. There are other little side projects every week and I'm fully lost in it. The pictures here show you how a small piece of my garden has developed in a week, and this is about 10% of my garden. I'm on level 1383 and there are at least 2000 levels I reckon with more added each week. Looks like me and Austin are going to be friends for a long time.

Gardenscapes is free to download and play. There are in-app purchases available to get you through quicker but just be patient, you don't need them.

Freebies come in many ways - a competition win, a sample, a free item in return for a review or simply finding something.
I'm not going to say where this freebie came from as someone will get into trouble. A high street supermarket is all I'm prepared to say. I always take a peek at the sections that sell things off cheap at the end of the day and on this particular day these black pudding rings were reduced to 19p and still in date - that's important to know. Now, I love a bit of congealed pigs' blood and happily eat it straight off the shelf, fried for breakfast or on a sandwich with mustard. It's a healthy food, delicious and good for keeping my iron levels up which is important to a platelet donor. I grabbed 2 of them, each in a bag with a printed barcode sticker on and headed to the till. 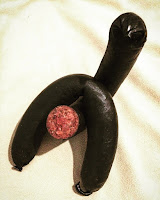 Well, the sticker wasn't having any of it. Beeping on the scanner, zapping it with the handheld scanner and then me reading the code out to have it typed in manually was all to no avail so the checkout assistant put them in my bag and said "oh, just have them." Sorted - £3.78 of black pudding for nowt. Blog alert.

Later that night I cracked one open and had a nibble with mustard and it wasn't too good. Dry and crumbly, I was disappointed but not surprised. Mass produced cheap food is never as good as the properly produced stuff. The next morning I fried a few slices for a breakfast sandwich and this was even worse. Not even brown sauce could save it and I am surprising myself, dear reader, to tell you that I didn't finish it and threw the other away. Powdery, tasteless and clagging up my mouth it's not an experience I'll repeat and will stick to Bury black puddings from supermarkets from now on.

Ballet at the Palace Theatre, Manchester - "The Song of the Earth" and "La Sylphide". 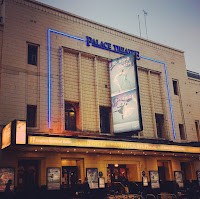 Going to see a ballet has been on my bucket list for a while and thanks to Showfilmfirst I managed to to tick it off as a freebie. I do like classical music (it's not all rock in my head) and have been to lots of classical concerts and a few operas so I was sure that it would be pleasant experience and I wasn't disappointed. 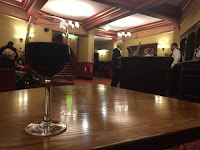 The Palace has been refurbished, I think, since I last visited some 10 years ago. Tidy, smart and filled with the most pleasant staff you can imagine, it's a fine theatre venue. It originally opened in 1897 but has probably changed over the years thanks to refurbs and the Luftwaffe who scored a direct hit. It still retains a traditional feel and charm and is a comfortable place to have a pre-show drink in, which is what I did so that I could peruse the programme and make sure I knew the plot of what I was going to see. 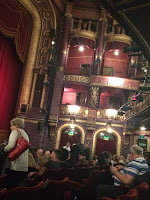 Song of the Earth is a spartan piece set to Mahler's music. No stage set or extravagant costumes, the choreography by Kenneth MacMillan interprets the music rather than gives a literal performance. As a first taste of ballet it was interesting if slightly strange. Musically, the orchestra seemed on song and the contralto and tenor performances of Rhonda Browne and Samuel Sakker were my personal highlight.
During the first interval the stage was set for La Sylphide set to music by Lovenskiold and with choreography by August Bournonville. This was more my sort of thing with a lore literal presentation of the plot and a storyline that I found it easier to follow. It's one of the oldest surviving ballets which made it a bit more special for me. Set in Scotland the costumes were traditional with kilts a-flying, witches a-plotting and booze a-flowing. My kind of party and I would have enjoyed the pre-nuptial celebrations of the story as James prepares for his marriage to Effy before being seduced by the Sylphide and the subsequent troubles this causes, aided by Madge the witch and Gurn (who fancies Effy himself).
This was pure pleasure and made all the better by having a great stage set. Stage sets fascinate me, they are my favourite part of any theatre visit - to see how the entrances and exits are managed and the Scottish farmhouse of Act 1 was one of the best. Follow the link for the dancers as this bit is important but I don't know enough to comment on how good each was. I do know that I had a top evening. That's why I started doing this blog - to get new experiences even though I don't have spare money. One day I will have disposable income and then I can pick and choose.
More ballets! More walks! More Denzel Washington! More artisan coffee! More discerning choices of black pudding! And I'll still be working through the levels of Gardenscapes....