Music, curry and clowns - my week of freebies

I've decided to change the way I blog and move to a weekly summary rather than individual posts. I like posting about each freebie on Instagram but trying to come up with something each day about, say, a bottle of Coke can be burdensome. I'll still post book reviews on Goodreads rather than here and link through but all others will be below. I also aim to still give away as prizes any freebies that I've enjoyed but don't want to keep - usually books or DVDs. Follow by email (it's on the right, over there) to make sure you find out when. I might not even run a competition and just give bits away to a subscriber drawn out of a virtual hat.


Sunday started the week well with the culmination of the Town Hall Sessions free music festival in Glossop. It moved into town centre this year rather than being in Bankswood Park in neighbouring Hadfield and several pubs and clubs also held gigs. Due to other commitments I didn't get to see as much as I liked but I did catch the closing set from Rook and the Ravens and they were excellent, as expected. Quite a coup getting a decent band like this at a free festival. They've been going for a few years now and have a great catalogue of songs (and singers) to choose from. Great weather and a decent turn out - roll on next year. 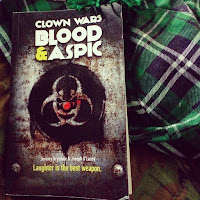 The week finished with me finishing off another book that I was lucky to win in one of Goodread's giveaways. Clown Wars : Blood & Aspic is dark humour or humorous horror, whichever way round you prefer. It's gruesome, sickening and genuinely funny and a clever satire on the state of the modern world. The pictures in my head were like scenes from the League of Gentlemen and the plot like a terry Pratchett. My full review is on Goodreads and I can't wait to read the rest of the series. Nice of the author to comment on my review too.

So there it is, my week in freebies. Not a bad haul and not a penny spent on all those. I'll leave you with another freebie - a ten song Spotify playlist to see you through until next week.