Saint Etienne at RNCM - I took it all in

Thanks to? Northern Soul 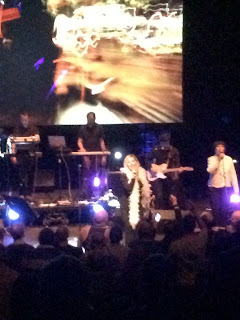 Another first for the Best Things in Life Blog. I've done albums, DVDs, smellies, days out, food, crockery, footballs and all manner of stuff. This is my first gig review, and what a wonderful gig I'm kicking off with.

Saint Etienne are a cameo of my student days. If those days were a film you'd hear 'Who do you think you are?' in the background at a Friday Night Bop in the Students' Union or tracks from the 'Tiger Bay' album thumping from a housemate's bedroom. They never quite made it to the forefront of my taste in those early to mid-nineties days when I headed more towards the rockier, guitar sound of indie pop. I don't mind, it's lovely to be able to find a whole back catalogue of a band in later life and think "I remember this", "this reminds me of so-and-so" or "wow, this is brilliant!"

Saint Etienne formed in 1990 and early tracks had a 'baggy' drum pattern of that time on songs such as 'Nothing can stop us'. Where other bands headed in a guitar direction Saint Etienne stayed with the dancier beats and are essentially a pop group, but a proper and cool pop group that retained the integrity and popularity of the indie scene.

This was my first time seeing Saint Etienne and my first time back at RNCM since my student days too, it's a wonderfully relaxed venue. I'm sure it won't be my last of either. The band treated us to a masterclass of pop music and musicianship that was a joy. They obviously have a group of loyal fans and they give those fans so much respect and love back - this was one of the most intimate gigs I've ever been to and more like a party than a gig.

Let's get one of the main things out of the way and answer the question I have been asked most since I went to see them. Is Sarah Cracknell still, you know...? The answer is yes, she is still stunningly beautiful. And funny, charming, talented, caring, empathic and pretty much perfect.

Having listened to their latest album 'Home Counties' twice during the day I was looking forward to hearing a few songs from this sublime piece of observational pop and I wasn't disappointed. My favourite track from the album ('Whyteleaf,') featured, as did 'Magpie Eyes' 'and, during the encore, the brilliantly worded 'Train drivers in eyeliner' - an anthem in theme that makes you want to shout "Yes!! Yes we do need more train drivers in eyeliner!"

Amongst the pop and observances of modern life we see Saint Etienne's caring side. This is a band that states clearly where their beliefs and allegiances lie from their Tweets during the recent election to the backdrop of "for the many not the few" that appeared throughout the night. This is a group that cares, that invites fans to dance on stage at the end of the gig and that appeals to such a diverse audience - many of Manchester's most fabulous were out on Sunday and it was magical.

Older fans weren't disappointed - 'You're in a bad way', 'Sylvie', 'Like a motorway' and, to close, 'He's on the phone' were received with joy, flamboyant dancing in the aisles and sing alongs. It's clear why Saint Etienne have such a loyal following and have continued unabated throughout their career - these aren't comeback albums and tours, these are a continuation. I'm already looking forward to the next album and tour.