Win a DVD of sex, drugs and cliches!

From? Not sure, it just kinda turned up in the post. Thanks!


Scroll down to enter to win this copy. You won't regret it, but be warned it has graphic images of everything your mother warned you about. 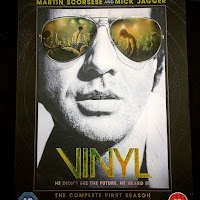 I'm pretty sure your job isn't like Richie Fenestra's. If your life is anything like Richie's then you wouldn't be reading this, it really wouldn't be your kinds thing. Unless you were trying to tap into the next big thing in blogs and wandered to sleazy corners of the internet to see what's going on, fuelled by cocaine and booze, having sexy young types throwing themselves at your feet and wasting money on extravagant food. I'll sleep with you if you can make me a star.

Richie is the main man at American Century records, a label that's on its arse and needs to get something big. Episode 1 sees the label lose out on Led Zeppelin having promised their German overlords that it was a done deal. Robert Plant is an early sample of real characters amongst the fiction and the casting is, well, fair. There's a small tendency for anyone British to have a mockney accent regardless of what they actually sound like (Robert Plant would NOT have sounded like that in the early 1970s!) but it's not too bad. Elvis sounds and looks great on stage in a later episode, as does Bowie, but when they talk the magic drops. I'm asking for the world here aren't I?

Richie is supported by a great cast of characters. Ray Romano is wonderful as Zak Yankovich, head of promotions and Max Casella as Julie Silver (A&R guy) provides my favourite moments when he dances to a new sound he likes, a dance I fail to be able recreate. Bobby Canavale tops the lot though as the wonderfully horrible Richie - the greatest anti-hero I've seen in recent years. He thinks he is trying to keep his marriage and fatherhood together but he's making no serious attempt to do so. He craves success and will even mess with the Mob to get it.

Everything is in here - gangsters, drugs, sex, murder, relationships, even a bit of the supernatural and lots of great music. The whole spectrum of the time is covered from rock n roll through blues, heavy rock, disco, mainstream and a good deal from the birth of punk. One of the several storylines running through the series stems from Richie's desire to find a new sound. Having witnessed the excitement of seeing the New York Dolls he finds himself signing The Dirty Bits, a proto-punk band fronted by Kip Stevens (played by James Jagger, son of executive producer Mick) and the series follows them through finding an image, a sound and a decent gig. I ain't gonna spoil it for ya...

I'm writing this a week after finishing watching the series and I'm missing it. There are so many more stories to tell but sadly it wasn't a success and there's no second series. You can, like me, hope that another network picks it up or you'll just have to finish it off in your head.

I'm giving away my copy of the series - try your luck below. UK only, I'm afraid, as I can't afford the postage further away! And check out the playlist of a selection of songs  that appear in the series (below) - everyone a belter.