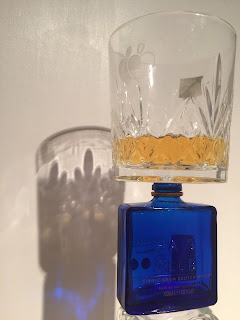 My exceedingly fascinating article on whisky was over a year ago. This is my first foray into a single grain, or at least the first time I've knowingly considered it. Single grains are, like single malts, made by a single distillery. The difference between grain and malt is that malt is always made with barley whereas grain can be be with any grain - corn or rye for example.

Other expert sites, who know more about this sort of thing than me, claim that single grains get an unfair press and can be as complex as single malts. The glass half empty would say that's poor man's single malt, the half fulls that it is a class above a blended.

Drinking this I fully agree that it's somewhere between a blend a single malt, and on a par with a cheaper single malt. A lovely pale colour and not harsh on the tongue, it's a fine drink. It's an award winning whisky that's produced in partnership with David Beckham and others. That name not only adds it a bit of gravitas, it also adds style - it comes in a stunning blue bottle that is a work of art in itself.

Anyway, in drinking tradition, here's a playlist of every song in my iTunes that has whisky in the title.