A Hero in France by Alan Furst

Today's freebie - A Hero in France by Alan Furst


The review below is taken from the Goodreads site. 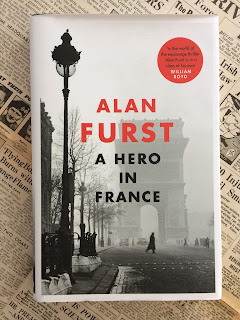 A Hero of France by Alan Furst
My rating: 3 of 5 stars

This was a Goodreads win. A minor point - the edition I received is titled "A hero in France", not "...of France".

Set in 1941 at the height of Nazi gains in Europe and when Britain is on the back foot, this spy novel takes place in the back streets of Paris and elsewhere in Europe. Dark and murky, the characters dive and sneak their way around avoiding Nazis and collaborators. This is a story of the Resistance.

Their aim is to rescue British airman and get them out of France and into Spain. A wide network of operatives, message carriers and shopkeepers whose front belies what is at the back all collude to outwit the German command. The network is successful, so Berlin ups its game to break up the network...

The novel is superbly detailed and captures the atmosphere and challenges of wartime France, and this is the high point of the novel. Sadly, the plot lacks a coherent narrative. The various missions are simple vignettes of stories and there is no obvious spine or thread to the story. This is the first Furst (!) novel I have read but from the blurb and background reading I don't believe it is one in a series - I checked as there are so many gaps. I want and need to know more about the characters - how they are in this position, what drives them to do this, how did these relationships form?

The novel is relatively short - fewer than 240 pages in hardback - and needs much more. There are far too many characters introduced with not enough time spent on each so we don't get to form an empathic relationship. This feels like a novel cut short or rushed - the number of characters, the amount of short missions, suggest a longer book or a series of books was either planned or is warranted.