Who did I get it? A competition win 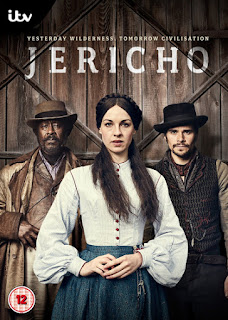 It's nice getting into the odd costume drama series isn't it? I don't have time to have loads on the go - my telly is not mine to command - and I always end up missing an episode and then never catching up. I recall with fondness my mom's excitement when the next episode of her latest series was due to start back in the pre-VHS days. Flambards was a particular favourite - we all settled down for that.

Having an entire series on DVD makes it easy. And what a strange series this is....

It's your bog standard costume drama on inspection of cover and plot review. Beautiful widow forced into setting up a lodging house in a shanty town to make ends meet. Handsome lodger moves in and inevitability ensues. In this case the shanty navvy town (known as Jericho) is set up next to the construction site of Culverdale viaduct, based on the real Ribblehead viaduct in Yorkshire. It's reet Yorkshire scenery, all barren moorland and accents to boot - but let's make one thing absolutely clear ...


This is a Western

Jericho is all wooden buildings set out like your typical Western town. It has a pub (or saloon); it has a brothel complete with lace bustled prostitutes; it is surrounded by empty moorland, isolated from other towns - much like the prairie or desert forms a wilderness around cowboyville. The characters wear borderline cowboy hats and even the background music hints at bluegrass type fiddly music.
One of the main characters is Ralph Coates, an ex-slave escaped from the American Civil War. the railroad leads them here, and it's the railroad they must construct to get them further on.

The pitch must have been simple - a western costume drama, set in Yorkshire. The attempts to replicate such a town in 19th century England are sometimes bordering tacky.

But is it any good as a drama? It's average. Avid costume drama fans would likely be disappointed - the plot twists and romance doesn't deliver anything that hasn't been seen a hundred times before. At it's heart is a nice idea - an event that happens before us so we know what happened, but we watch as the series unfolds and everyone else catches up. There are heroes and villains, there's redemption and revenge. There are veiled references to the social norms of the time and intrigues around family, inheritance and class. Jessica Raine is in fine form, brooded over by Hans Matheson who (and this is cruel of me) comes across as a poor man's Sean Bean. The plot is OK - enough for me to watch all 8 episodes and not get too bored.

My main gripe is the lack of belief. All of the buildings are pristine wooden cabins. I realise that they would have been built at around the same time but I also think they would have had more character or personalisation. These looked like a theme park, together with perfect duckboards and nice grass in between, something that would surely have disappeared very soon under so many feet.

Difficult to believe number 2 - everyone willingly works for an American incomer, an escaped slave, no questions asked. He commands respect from the off, yet once people know the secret class origins of someone else they suddenly mistrust him - I found it difficult to empathise with people's fickleness.

Difficult to believe number 3 - the passage of time. Several plots appear to being played concurrently but it's not clear how much time has elapsed. In one case, (and it's difficult to explain this without a spoiler, but I think i can do it) the relationship between 2 characters starts to change after an event, an event which happens just as it is decided to build a mine. The way they talk to each other in one scene suggests that several days have passed since the event, yet they then wander down to the fully dug mine complete with pit props, rails and trolleys! And yes, the mine looks just like a gold mine from a Western, only this one mines sandstone.

It's a shame because the setting, context and basic plot line deserved better. The final scene finishes with a huge set up for the next series and I would gladly have settled to watch how things develop. Sadly, that won't happen - the small lack of attention to detail didn't wash with viewers or ITV execs and a second series wasn't commissioned.