When public buildings meant something.... 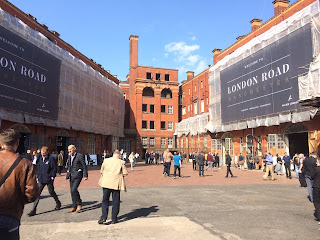 The latest freebie? A look inside London Road Fire Station, plus other bits and bobs

How? I registered for details and was invited along.


In 1992 I moved to Manchester to study. I was 21 and it was my first time away from home. I'm still there now so that tells you how things worked out, but in those early days I had a few lonely moments.

My girlfriend at the time was from Liverpool but was studying at Reaseheath College in Cheshire. She'd often come to stay with me for the weekend and on Sunday nights I would see her back to Piccadilly on the bus. One Sunday night found me waiting on London Road for the 192 back to my digs. Opposite me was this beautiful behemoth of a building which had obviously seen better days and seemed derelict. It wasn't, the Coroner's Court still occupied on corner, but the rest was unused and had been for several years. I was feeling a bit overwhelmed with things, the first flush of excitement at being in Manchester was starting to fade, coursework was picking up, money was running out and I felt a bit lonely. 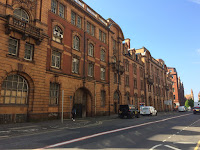 I remember this well because I had my Walkman on and just as I felt overwhelmed at not being in my homely Midlands village 'Heart of the Sunrise' came on with it's poignant line 'I feel lost in the city'. I recall the song every time I walk past, and that's a lot considering I work 5 minutes away. 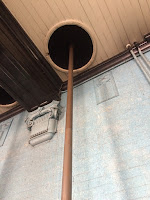 Later I worked at UMIST (now University of Manchester), again just 5 minutes away and the fire station between work and my commute home. I'd seen pictures, but never had I seen inside.

After too many years of disgraceful waste by Britannia Hotels and Manchester City Council not showing big enough balls to follow up on threats the grade II* building was on the buildings at risk register. 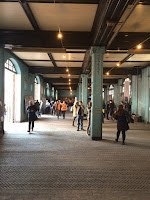 With it's design featuring accommodation for firemen and it's prime location next to Manchester Piccadilly rail station it's always cried out to be converted into a hotel. Finally, last year, Allied London acquired the site and it is they who opened it up to show their proposals. After 24 years I couldn't miss the chance - and I would have paid to go in! 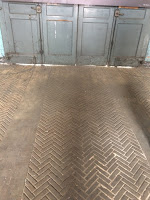 The engine room (named because it was where the vehicles were housed, ready to leave straight out onto Fairfield Street) was my first port of call. The floor still has it's herringbone finish, the glazed bricks still have a hint of pride, the fireman's pole still defiantly reaching up to higher quarters. A free cup of tea and a pastry here too, for the freebie record! Oh, and a Bic pen, kindly given to fill in a postcard with feedback.

Across the inner courtyard the ambulance room looked in worse repair and the workshops similarly so. However, each was cleverly home to displays of Allied London's proposed mixed-use designs for hotel, bars, speakeasy, cinema, retail and more. With many of the original features being retained, it will be stunning. 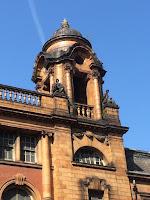 I don't think I'll ever get chance to see the dusty Coroner's Court, it's wooden benches still present, or the cells of the old Police station, the bank vaults nor the social club. I did get to see more than I ever thought I would, though, and it moved me more than I thought.

I thoroughly recommend looking at the proposals, even if just for the stunning photography of it's interior, with a million stories to tell. 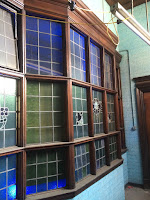