What did I get? Blue Valentine DVD
How did I get it? part of a prize package from Gay Times 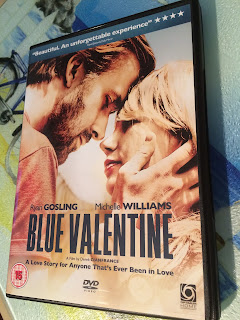 After The Imitation Game and Rush, this is the final 'true story' film in this little collection I won from Gay Times. This isn't a story of famous people though. This is the story of Dean and Cindy, a married couple living in rural Pennsylvania. The film flits between the present and the current state of their marriage, and the past - how they met, fell in love, the early years of their daughter, Frankie (4 in the present time).

It's not a comedy.

The film features extraordinary performances from Ryan Gosling as Dean and Michelle Williams (Oscar-nominated as Cindy). Parts of the film are improvised and the lack of background and dramatic music add to the realism. It's saucy too - controversially rated as 15 when it's got some right rude bits going on.

The film has sub-texts about ambition and expectations. Dean is quite happy with he life - his job, his family. Cindy wants more and is critical of his lack of ambition - but why does achieving happiness count as a lack of ambition? This is the saddest part. Dean may drink more than he should but he's not violent - that is carefully explained - and he is loyal. He's an average family man, but sometimes that's not enough.

Dean makes sacrifices and does his best for his family, choosing to forget Cindy's past mistakes. Sometimes the good guy loses....
at May 20, 2016