Whatcha get this time? Rush DVD
Where from? Part of a competition prize package from Gay Times 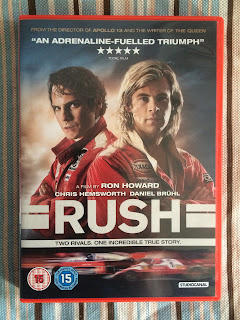 I was 5 in 1976. I first became aware of Formula 1 around 1979/80 when Niki Lauda was still racing and appearing in my Panini sticker book. It was the year james Hunt finished racing but I barely recall seeing him do what he did best. Hunt was there throughout my childhood but usually as a chat show guest or commentator.

This film tells the story of Hunt and Lauda's rivalry through the 1976 season when Lauda was reigning champion and Hunt an English playboy pretender to the throne. It's a true story and sticks mostly to the facts, the main ones being the eventual winner of that year's championship, the circumstances of that victory and Lauda's infamous crash part way though the season. Lauda was trapped in a burning car for over a minute and suffered horrific burns to his face and hands - the scars of which we have all seen throughout his continued involvement in F1. Incredibly, Lauda returned to race after just 6 weeks and became more successful in F1. Hunt died tragically early in 1993 at the age of just 45.

The story starts a few years before to set the scene of how Lauda and Hunt became F1 drivers. The film flies through this and barely sets the scene, but it's all that's needed to keep the film interesting and way from being a geek-fest.

Our Nellie found the acting incredible. She was most impressed with the accuracy of both actors. I'm a little more fussy and found the odd Hemsworth attempt at well spoken English awkward, but mostly fair enough. Bruhl, as Lauda, is more convincing with his dental work. One wonders how close their portrayed personalities are to actuality. Both come across as not very likable but brave and honourable. Hunt in his selfish quest for self-glory and fun, Lauda as the quintessential Teuton driven to succeed by efficient application.

At just under 2 hours Rush literally races through the plot and is no worse for it. I'll probably watch it again if it's on telly, but doubt I'll turn tot he DVD on a quiet night. It's a must for anyone unfamiliar with the story of the 1976 F1 season, an interest for the rest.