What did I get? Room original motion picture soundtrack by Stephen Rennicks
And how? Part of the same prize package as the book, thanks to the excellent Gay Times

So, after yesterday's post about the emotionally exhausting but stunning book I wanted to get straight to talking about the soundtrack. This is the soundtrack to the film (obv.) and I have no idea how the film might differ from the book. Looking at the song titles suggests not too much. 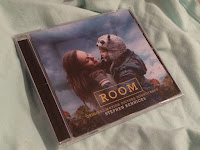 The song titles nearly threw me. I took the soundtrack on holiday with me last week, before I had read the book, and listened to it a few times. It was only when I started reading that I realised I might have a an idea about what might be coming. 'Mouse' might not give too much away but ... well, just be careful when checking the track list OK?

Like the story, the soundtrack is very minimal. The simple notes of 'Opening' are repeated in several other tracks throughout and even the track that I assume accompanies the most heart thumping, dramatic part of the book is barely a single note, the sparsest track here. It would be interesting to see the direction of the film using the music as a guide.

This isn't really a soundtrack, it's more incidental music. A book that is set in a single room that neither occupant has left for 7 years demands a soundtrack that fits the mundanity of their lives. This album is just that, but it is also beautiful. Simple, calming - it could be the sound of gentle rainfall, the birth of a baby, leaves falling from a tree. I might fall asleep to this album tonight.

Rennicks produced a few songs for the weird film 'Frank and they too fall into the gap between soundtrack and incidental music. A talented musician who interprets scenes well, I'm sure I'll be hearing more from this composer in the future. That's the beauty of Spotify, I can go explore like I did with other soundtrack composers such as Yann Tiersen.

Maybe the album's not quite as memorable as the book, but it's pleasing all the same. The film has a lot to live up to.