What did I get? Room by Emma Donoghue (paperback)
How? A competition win from Gay Times

This is the first instalment of a decent competition win from Gay Times. The soundtrack to Room will 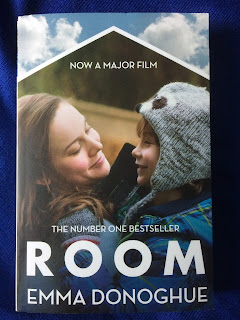 follow and there were a few other DVDs in the package too, all deserving of their own article. Gay Times has some excellent quality reviews and articles on their site and I've been following it for many years. They have great comps too.

Room (not The Room - that's important) is by Irish writer Emma Donoghue but set in the US. It's a work of fiction that I assume is inspired by harrowing stories of people kidnapped and kept captive for many years. The entire novel is told from the perspective of 5 year old Jack as he describes his life with Ma in the room that has been his entire world since his birth. Everything in Room is part of his world - Bed, Wardrobe, Sink etc. Old Nick comes often enough to provide food and other essentials.

It's difficult to discuss too much of the plot without giving the development away. I was prepared for heartache (nothing - NOTHING - makes me sadder than things happening to kids who don't understand why, in fiction, film or real life) and I admit to having to wipe tears away on a busy train.

I don't think this is a spoiler, but if in doubt stop reading now...

...I wasn't as dismayed as I expected to be. Donahue could have taken the easy route and written the story we expect. The Hollywood story. That she chose to tell an entirely plausible story makes this book the stunner I wasn't expecting. It's interesting to see other reviews on Goodreads and find opinion split on writing from the perspective of the child. I found it sensitive, respectful and believable; others find it a but nauseating. I really hope all those negative reviewers stuck with it to the end and didn't give up. Being held captive in a single room IS boring, I believe that to be the point of the start of this book. I certainly didn't find it boring to read about because Jack has a child's enthusiasm and approach to play. There are two major points in the book that demand you read through to find the outcome - I defy anyone not to.

I really wasn't sure that I was in the right mood for this book but oh, my days! It left me emotionally exhausted and it fully deserves the praise it has received. The bond between a mother and son is so strong for most of us, maybe this is what strikes home most.

This song is relevant, but you'll have to trust me on that - or read Room.