What did I get? Tangerines DVD
How did I get it? It was a competition win, but I'm not sure where from. It just turned up in the post.

Are you, like me, trying to make sense of the world? The internet has made us a global village with a great knowledge of so many cultures that we should be more understanding and friendly. Not so; members of the human race seem more intent than ever on finding ways to hate anyone not like themselves. 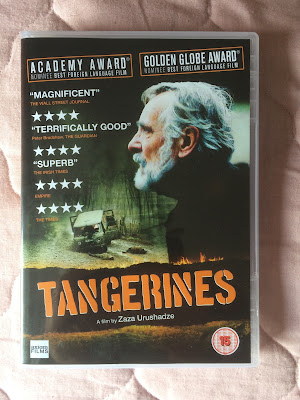 The Berlin wall coming down was a great moment that symbolised freedom to many. It was the fall of communism, the pulling back of the Iron Curtain, and yet it also heralded a chain of frightening times across Europe where ethnic groups fought each other to claim lands that all said was rightfully theirs. In Britain we are probably more familiar with the Balkan conflict in the former Yugoslavia and good luck to anyone who worked out what was going on there, who was fighting whom and why. Similar conflicts were taking place in the former Soviet Union that rumble on to this day. This DVD didn't resolve the whys and wherefores for me, but opened my eyes to what it was like at that time. It's a wonderful film.

Ivo is an old man living in his simple hut in Georgia. He spends his days making crates for his neighbour, Margus, who farms tangerines. They appear to be the only people in their muddy little lane in this rural backwater, ethnic Estonians who have refused to flee Georgia with their families.

The war draws close to their harsh existence and soon they are visited by Chechen mercenaries, muslim fighters who are battling the Georgians. They respectfully leave Ivo after he feeds them but soon are caught in a firefight with Georgians.

Ivo ends up tending 2 injured men, one from each side. Their convalescence starts with mutual hatred and promises of revenge, but Ivo maintains peace as the enemies come to know each other.

War is never far away and the pain it creates evident. I'm not going further as I won't spoil a powerful ending.

It's no wonder this was Oscar nominated for the best foreign language film. Simple in structure (about 95% of the film takes part in a stretch of road just a few hundred yards long, with Ivo's hut and workshop and Margus's cottage with adjacent orchard the only buildings) it has incredible performances with Giorgi Nakashidze being particularly mesmerising to me as Ahmed, the mercenary fighting for the Abkhazians. This film is an Estonian - Georgian film. If only everyone could co-operate to create, not destroy. Love and peace to you all.