James Clavell's "Shōgun" - my book of the year so far

What did I get? - "Shogun" by James Clavell (paperback)
How did I get it? - from a clear-out at work

My first post for 2 weeks but there is a reason. I have been trying so hard to finish this book that I have been ploughing through since early January. It's been a tough time at work this year and I think I must have dozed more than I've read on my commute. 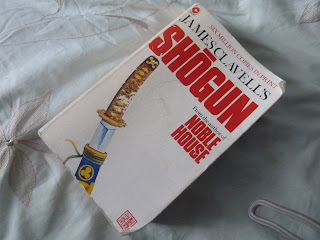 When I started the blog I decided that the rule I would follow is to review something that I had received for free that I would usually have to pay for and nothing more complicated than that. Usually that's not too difficult as most of my posts are competition wins or items given me for review, but sometimes I get other stuff that would ordinarily cost me, or you, money. I reviewed a pencil last month. My blog, my rules.A second hand book would usually cost me money so in it goes.

So, during a clear out at work, I claimed a couple of paperback books that nobody else wanted. James Clavell is an author that I'd never read so I went for it.

I'll be honest, I struggled to get into it. 1200 pages over two and a half  months - you must think I'm daft to have carried on. The thing is, reader, I can't leave a book once I've started it. the only book I can remember abandoning was The Dubliners by James Joyce, That's the benchmark I work by.

I'd reached page 400 when I lost the book. I put in a request to borrow a copy from my local library so that I could finish it and then I found it again in the glove box of my car.

Shōgun is based on true events and characters and at the heart of it the fascinating story of the first Englishman to land on Japaneses shores who eventually becomes a Samurai. I say fascinating; the true story is fascinating but this fictional version known as John Blackthorne is less so.

Blackthorne is shipwrecked on a Japanese Island at a turbulent time in their history. The heir is young and the islands ruled by 5 powerful regents. Blackthorne is captured by one, rescued by another, befriended and used by the same and is at the heart of political intrigue and plotting that culminates on a decisive battle. During this time he becomes truly Japanised (© Idiotinagrownupsbody) and comes to despise his original shipmates. There is romance, violence, politics and history in good measure.

It's easy to understand why this is standard reading for students of Japan and Japanese culture. For 2 months I've drunk nothing but green tea - I'm antioxidised like never before - and I even tracked down some saké from a Japanese restaurant in Manchester before finding it in my local Tesco. I've eaten plenty of rice, pickled vegetables and fish. I've found a samisen album on Spotify that was on repeat for a while. What it didn't do for me was the basic requirement of a novel; it didn't grip me. The entire plot and action would make a wonderful 500 page novel, but the major plot points were dragged too far apart for me to really enjoy it. Given the chance to develop, I didn't really feel as if I 'knew' any of the characters, even though the story is told from various viewpoints.

Clavell has sold enough copies of this and his other Asian sagas to show that my view isn't the majority one, but I don't think you'll find me reading Tai-Pan anytime soon. Samisen music and saké I'll be doing again, but not long-winded sagas.