Glenfiddich and its position in the water cycle


What did I get? A 70cl bottle of Glenfiddich 12 year old single malt with a personalised label

Ooh! Sounds nice. How did you get that? A competition win from Nicholson's pubs

I could have reviewed this years ago, but I only won this bottle this month so I have to stick to the rules. I often look at single malts in the supermarket and wish I could afford to start a collection, I imagine each bottle sat on the top of my sideboard at home. This time I literally have a bottle with my name on it given away by Nicholson's pubs to celebrate Burns Night. 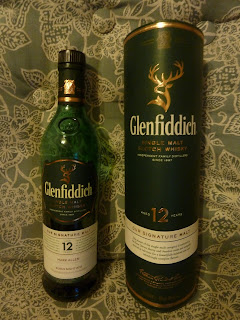 I love a drop of whisky. Like the classical music post earlier I'm not going to pretend I'm an expert on whisky either but I have spent a couple of decades enjoying it and I am married to a half-Scottish lassie who encourages my buying of it.
You can't go wrong with Glenfiddich.  I've known for some years that it's my lassie's favoured Scotch. I'll be honest, there are some I favour more but that's because of the quality of Speyside distilling. I've yet to find a bad one.

"Never have whisky without water, and never have water without whisky"

The word 'whisky' is an anglicised spelling of the Gaelic word 'Uisge' or 'Uisce' depending on whether it's Scots Gaelic or Irish Gaelic - you'll have to do a bit of your own searching to learn that the 'Gaels' came from Ireland  to Scotland.
Even though, etymologically, this is water I take my scotch with a tiny splash of more water from the tap. Enough to break the surface but not to dilute the taste too much.  I'll take a sip to get the flavour of the drink on its own but that's as far as it goes.
I'm not a big fan of ice but a single cube will do if nothing else is available (Scotland's cold enough, they don't need a cold drink up there) and will only add dry ginger or soda to a blended whisky and even then if it's a cheapie that needs cheering up. There's no place for cola, lemonade or orange in scotch in my book, however cheap the blend.  My grandma liked a dram in her tea and it's something I sometimes resort to on a really cold day at my local football club. It is not recommended to add it to Bovril. 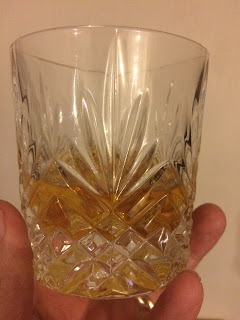 So how do I review something I've known is lovely for decades?  I asked 'oor lass' and she described it as smooth, mellow and delicious. I agree - it's certainly smooth. It's not 'peaty' like some but does have a flavour that's fuller than many single malts without the bitter bite at the back of the tongue you get from a blended whisky. A personalised label makes this a wonderful gift for a milestone birthday or as a keepsake for the birth of a child.

Raymond Chandler did say that there are no bad whiskeys, only some that are better than others.  He wasn't talking about Scotch; the letter 'e' is added to Amercian whiskeys such as bourbon, and I guess this is through the Irish influence as Irish whiskey is spelled the same, whereas your Canadian shows their Scottish influence by using 'whisky'. I agree with Raymond though, it's horses for courses. If you drink enough then even the worst whisky can still bring a smile to the face (although you'll need the dry ginger for this if it's really bad).

If you've been taken by this review and have decided to treat yourself to some Glenfiddich, or even if you're settled with a Scotch of an alternative variety,  I've created a Scottish playlist to listen along to while you're drinking . Slainte!