What did I get for nowt? Aferim! DVD
How did I do that then? Competition win from Eye for Film 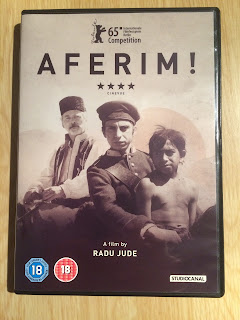 I don't mind a bit of culture, me. I prefer switching off with a good comedy but there's something rewarding in fixing on a film that demands attention and concentration. I saved this freebie for such a moment and that moment arrived last Sunday. Our Nellie had the ironing board out and Vera on the telly so I popped in the earphones and slipped Aferim! into the laptop.
Aferim! is a Romanian (subtitled) film of 2015 that was entered the winner of the Silver Bear for Best Director at the 65th Berlin International Film Festival, which sounds like a big deal. I'm not a film buff.
Set in Wallachia (now part of Romania) in 1835 the film (black and white, that's how arty this is)  concerns Constantin, a constable, and his son as they set out to locate and capture a runaway gypsy slave who has stolen from the local boyar  - a type of lord.
Constandin is a pompous and idiotic man, probably barely educated but clever and experienced enough to rise to a position of enforcement in his community. An ex-soldier, he constantly passes on his 'wisdom' and outlook on life to his doting son. He reminds me very much of Don Quixote with his Sancho Panza following behind, spouting his philosophy as a series of facts.
On their journey looking for the slave they give us an interesting outlook on 19th century Wallachia and its harsh serfdom. Priests seem central to peasant life and enjoy a life that doesn't appear rich but certainly comfortable. Races and creeds are pigeon-holed throughout, particularly Jews and gypsies who don't fare well in Wallachian priests' opinions. The rich, the poor, the Turks, the French and even us English all get a mention - we're fair, apparently. Whether he meant in colour or judicially I'm not sure.
Slaves and gypsies have a god-awful life in this film. A hand to mouth existence and the first to get it in the neck when things go wrong. They point Constantin and son in the right direction to catch the slave who is eventually unearthed at a cottage being hidden by a weaver and he and a gypsy child are captured and the journey back begins. The constable, his son, the slave and the child share stories and conversations until their paths part. Eventually they reach the boyar - this chap 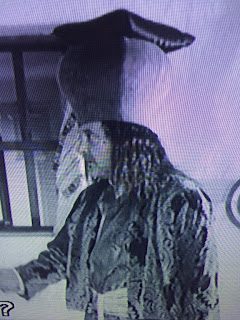 with his impressive headwear. Now we know why everyone is so poor, this chap has everything including peacocks in his house and that hat.

Life was cruel then, I wonder how far we have come?  Such cruelty is not generally accepted anywhere as a matter of life but hatred still exists and greater cruelty sadly still makes the news. I'd rather be in 21st century England than 19th Wallachia.
What can we learn from this film? Life was hard and everyone did what they needed to do to survive whether it be fishing all day, tracking fugitives for reward, selling their own bodies, selling kids into slavery and all finding ways to justify their actions. We learned nobody was nice to anyone else.
We learned not to fiddle around with the boyar's wife. Seriously, if you take one message from this film then make sure it's not to fiddle around with a boyar's wife.
If I were on IMDB I'd be ranking this film around the 7/10 mark. Deserving of its accolades and deep in conversations on the meaning of life. The final quarter passes by too quickly to make it a classic in my book and ends unsatisfactorily, but the plotline isn't the real point - it's the setting of eastern Europe of nearly 200 years ago and whether we can understand how Europe got to where it is now.